I remember it like it was yesterday. I woke up so suddenly and I just knew something was different. I felt a change in my body, and i was positive I was pregnant. I don’t know how to describe it other than I felt this undeniable connection to a life inside me. I know that sounds crazy, but I woke up Kyle and said “I think I’m pregnant”. I remember he said “how do you know?” and I said “I just do”. I guess I shouldn’t be surprised that everything about this pregnancy was different and special even from the moment I felt it start.

I decided to run to the store and pick up a home pregnancy test. I remember feeling such a mix of emotions. We had experienced miscarriages before, so my heart was guarded, I didn’t want to get my hopes up just to be let down again but I was positive I would see that little blue plus sign so I raced upstairs and tested. I waited… fantasizing about bringing a baby home and calculating my due date in my head.  After the agonizing 3mins, I looked down to see a negative test! I was shocked and frustrated that I allowed myself to get excited, and to be fooled by my own body. I was disappointed but at least I knew for sure. As the days passed I couldn’t shake the feeling that I was pregnant, I had a friend who was expecting, so Kyle thought maybe I was psychosomatically imagining my symptoms in some sort of distance sympathy pregnancy… over the course of the next 2 weeks I took 3 more tests, I was adamant that I was pregnant, but all of them were negative. What’s Einstein’s definition of insanity? Oh yea, “doing the same thing over and over and expecting different results”. So I guess I was insane.

About 5 or 6 weeks after my initial test I had a yearly physical scheduled with my doctor. I went in and they asked me how I was feeling etc., all the typical intake questions that the doctors office always asks. I remember answering the questions one by one and then just blurting out at the nurse “maybe I’m insane but I’m positive I’m pregnant! I’ve taken 4 negative tests but I just feel like I am, so I either need absolute confirmation or a psychiatrist”… The nurse laughed and said if all my tests were negative I likely wasn’t pregnant, but that they would do a urine test to be sure. She handed me a plastic cup and my daughter Ella and I went off to the bathroom to collect for testing. I remember it clearly because as I was awkwardly squatting over the cup trying to hold back my shirt and not get pee all over my hands, my very tall 2 year old daughter pulled the lever of the bathroom door and opened it wide so the whole doctors office could see me… wow thanks Ella… I guess I should have been used to public humiliation being the mother of a toddler but that one stung! haha I came back into the room and waited with Ella who was becoming increasingly less patient and more agitated. FINALLY the doctor came into the room holding a folded up paper towel, and she said “well you aren’t insane, because you’re pregnant”. I think my jaw dropped to the floor. Despite how convinced I was, it was shocking to hear it out loud, particularly after all the negative tests. She opened the paper towel and showed me my test which was obviously positive. I instantly started to cry, she gave me a hug and told me it was very early, about 5 or 6 weeks and she was so happy to give me good news for once.

I couldn’t contain my excitement, I called Kyle on his “emergency” work phone number to tell him, and that is where our story starts. in July of 2017 with this little positive pregnancy test 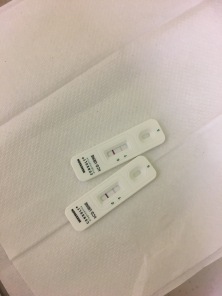 View all posts by Jennifer Bothe